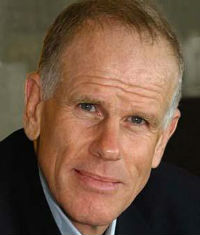 People are inspired by great adventure. And the name Hillary is synonymous with adventure. A powerful and dynamic speaker, he takes his audience “with him” on his many extraordinary experiences: to the summit of Mt Everest; traversing Antarctica to the South Pole; feeding a pod of sharks; or making a terrifying descent of K2 down a vast vertical rock face in a vicious storm. He ably connects such dramatic achievements to the challenges faced by individuals and teams striving for excellence, coping with change, or overcoming obstacles in their own fields.

* Surviving the storm on K2: In 1995 Peter Hillary turned his back on a climb of the world’s second highest mountain, the notorious K2. He was just a few hundred metres from the summit. He survived, but the storm claimed the lives of seven others he’d been climbing with.

* Landing small aircraft at the North Pole with Sir Edmund and astronaut Neil Armstrong.
* The first ski descent of Mt Aspiring: the Matterhorn of the Southern Hemisphere.
* The first high-altitude traverse of the Himalayan Range, 1981: a 3000 mile/5000 kms route from Mt Kanchenjunga in Sikkim through Nepal and India to K2 in Pakistan.
* From the ‘Ocean to the Sky’: jetboating up the sacred Ganges river with his father in 1977, from the Sundarbunds in the Bay of Bengal to high in the Himalayas near Badrinath, where they made first ascents of Mount Nar Parbat and Mount Akash Parbat.
* Shark frenzies in the Coral Sea: feeding and filming sharks with Ron and Valerie Taylor at the Osprey Reef 200 kms off the north Queensland coast.

Business
Peter is an adventure travel operator and guide specialising in the Himalayas and Antarctica. He guided Qantas CEO James Strong on Mt Vinson in Antarctica and entrepreneur Dick Smith up Carstenz Pyramid in Irian Jaya. He holds a commercial pilot’s license for fixed wing aircraft. He also works as a professional public speaker and writer. He is the author of five mountaineering books and one children’s book; he writes magazine articles, works on outdoor equipment design and marketing for Fairydown Adventure, the same company that equipped his father and Tenzing in 1953.

Media
Peter has featured extensively on television including two interviews on Good Morning America, The Late Show with David Letterman, countless major radio programs and print media such as The New York Times and Parade Magazine. He has appeared in numerous documentaries, including the National Geographic feature, Surviving Everest, in 2003.

Philanthropy
Peter is a member of the Himalayan Trust, an organisation founded by his father to assist the local people of the Mount Everest region, where they have built and run 42 schools, hospitals and medical clinics. Since 1992, Peter has taken over 1,000 teenagers to assist with construction work on some of the Himalayan Trust hospitals and schools and other community projects.

Television, Film and radio
* National Geographic documentary celebrating the 50th Anniversary of the climbing of Mt Everest, premiered April 2003.
* The Late Show with David Letterman – In-studio interview in New York with David Letterman
* Good Morning America – Two interviews; one live via satellite from Scott Base, Antarctica; the other an in-studio New York appearance.
* Up Close and Personal – Feature interview with Ray Martin, Channel Nine, Australia (two appearances)
* West Matukituki Ramble: Trekking and Climbing in New Zealand’s South Island, Parts One and Two produced by Anyplace Wild for PBS
* Sons of the Mountaineers: Trekking and Climbing in New Zealand, Parts One and Two, part of the series Anyplace Wild produced by Environmental Recreation Group, Inc in Camden, Maine, aired in most states of the US on PBS during mid-1998
* Everest Expedition video for the Australian Wool Corporation
* The Escape programme for Channel 7, Australia, in 1987 and ’88, as a programme presenter
* The Everest Expedition film, 1987
* The Rimo Expedition film, 1986
* India, a personal encounter, 1986
* Filming sharks on the Great Barrier Reef, 1985.
* Return to Everest with the National Geographic, 1980 and 1983.
* From the Ocean to the Sky with Sir Edmund Hillary, 1977
* The Kaipo Wall with Sir Edmund Hillary, 1974
* Numerous other minor documentary films and promotional films; and countless interviews for television and radio in the United States, Australia, New Zealand, and the United Kingdom, including the BBC, NHK and Associated Press.

Biographical Information
Peter Hillary was born in Auckland in 1954. He is the son of Sir Edmund and Lady Louise Hillary. He is married and has four children.