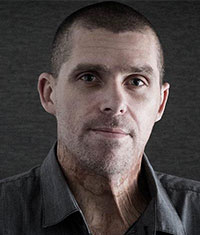 Phoenix Workplace Safety speaker Rohan Sykes was a normal guy. He loved his sport, captain-coaching cricket clubs around Geelong, he had a passion for playing music, dabbled in home renovations and enjoyed spending time friends. His pride and joy? Wife, Claire, and two daughters, Zoey and Dakota, who were two years old and five months old, respectively, at the time of Rohan’s life-changing accident in 2011.

Rohan took on a fitter and turner apprenticeship at ALCOA in 2006. He immediately showed a passion for workplace safety and safe work practices, becoming an apprentice safety rep in 2008. In this time he gained a sound understanding of what can go wrong in industrial workplaces and what to look out for.

Not long after Dakota was born, Rohan started work as a multi-skilled operator at a glass bottle factory in Melbourne’s west. After less than six months in the job he suffered horrific burns to 35 per cent of his body when he was exposed to radiant heat from molten glass which caused him to catch fire.

The experiences that followed, including three days in an induced coma, six weeks in hospital and years of rehabilitation, shaped who Rohan is today. He is passionate about workplace safety, not only from the perspective of employers, but he wants to urge people to take responsibility for their own safety at work.

Through his speaking, Rohan wants as many people as possible from all walks of life and all career paths to hear his story, and gain a better understanding of what can go wrong and how it can change your life. He wants to motivate people to improve their attitudes towards workplace safety to avoid accidents like his, or inspire others to get through their ordeal.