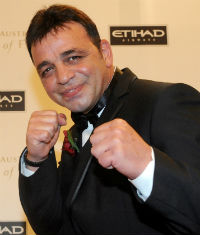 Stan The Man Longinidis  is a keynote and motivational speaker who addresses topics such as mindset, leadership, performance, productivity    .

Sports Australia Hall of Fame Champion 2013, the first ever to be inducted from any martial art fighting code, Stan The Man longinidis is one of five hall of famers selected by the prestigious organisation Sahof to mentor five fast growing young future world champions in their sport.

The  well respected keynote and motivational speaker Longinidis was a trail blazer across the world during his illustrious 22 year career.  the Eight Time World Heavyweight Kickboxing Legend Stan The Man left Australian shores at barely 20 years of age after he was spotted by american scouts in Perth in 1987 as he fought for his very first World Title.  His opponent Santiago Gaza and Stan fought and grinded twelve rounds but the fight was called a draw.

Later in the change rooms Longinidis was approached by a man named Blinky Rodriguez, brother in law of the well known Benny The Jet Urquidez. they had seen some raw talent in longinidis that night and invited him to the most famous training stable in the world at the time called “Benny’s Jet Centre” in Los Angeles.
After facing some negative feedback from different people back home in Melbourne after his Perth fight with Gaza, Longinidis packed his things and with the blessing of his amazing and supportive family flew to the US to pursue his dream of becoming the first ever world champion kick boxer.  Arriving in lA longinidis found himself training with the likes of Jean Claude Vanne Damme, Chuck Norris and even Jodie Foster as she prepared for a new movie at the time.

Stan had taken seventeen straight wins around the world as he reached the peak of his unprecedented career. Known as the Thunder from Down Under, Longinidis had put his face to the sport around the world. the gladiators arena was now his home. The fights continued and even after experiencing losses along the way in his success Stan The Man expressed grace and humility not only in the ring but also out of the ring. Longinidis retired soon after the most anticipated fight in the world at the time against Dennis The Terminator Alexio. Stan The Man struck the Terminator with a crushing blow to the leg snapping his shin as Dennis fell the floor in seconds. Longinidis was forced to wear ankle pads, Alexio demanded that the rounds were increased from two minutes to three minutes, Alexio chose two out of three judges and he also selected his good friend to act as referee. against all odds, Stan The Man finally beat his nemesis he had been challenging publicly for four and a half years.

A mans character is based on conduct. Longinidis displayed good values and principals and nowadays finds himself as the CEO of his business Stan The Man Group founded some 18 months. Longinidis has strong players who are a part of his business  which sees him as a powerful keynote speaker travelling around Australia addressing many audiences from the Australian Defence Force in Canberra to one of the largest road construction companies here and in New Zealand. Stan The Man Group the business also sees Stan Longinidis providing informal power of mindset sessions for different industries. they are customised and developed in house by stan The Man Group.

“Stan The Man Fitness Academy” is now open in Blackburn