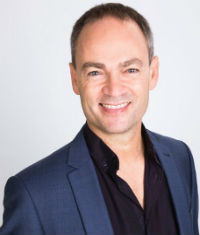 Darryl Lovegrove is an award winning entertainment producer, entrepreneur and one of Australia’s most booked speakers after continually rating #1 keynote speaker at most conferences.

A multi-award winning performer, Darryl’s reputation is well established in the contrasting worlds of musical theatre, opera and rock. Winning the Australian singing competition in 1989, Darryl honed his musical skills as a member of the original Australian casts of Les Miserables and Chess, before his award-winning portrayal of Jesus in the Australian and New Zealand tours of Jesus Christ Superstar for which he won New Zealand’s Entertainer of the Year ‘Rising Star’ award and an Australian ‘MO Award’ nomination.
Career highlights include the Australasian tour of The Music of Andrew Lloyd Webber where he featured with Sarah Brightman and Anthony Warlow and starring roles in The World Goes Round, An Unfinished Song, David William’s Sanctuary and many others.

He received critical acclaim when he both produced and starred as John Lennon in the national New Zealand tour of Looking Through a Glass Onion – an evening with John Lennon in words and music. Darryl toured Australia and NZ with Glenn Shorrock performing the music of Lennon & McCartney in Let it Be and with original members of ‘Split Enz’ and the New Zealand Symphony Orchestra in ‘ENZO’.

Highly sought-after as a keynote speaker Darryl is also in demand as an MC, solo performer and concert performer.

What does Darryl talk about?
Darryl tells a compelling global business success story of, literally, operatic proportions.
‘Passion, Perseverance…and Puccini’
His story of how he and a mate took the operatic phenomenon ‘The Three Waiters’ to the world and made it #1 continues to captivate audiences from many industries and fields around the globe. It is one of triumph over adversity; of a proactive and innovative duo who took the events industry world by storm by creating a show now seen over 11,000 times in over 80 countries.
Darryl cuts through corporate jargon to recount his amazing story, of a guy who ‘never took no for an answer’ and provides an honest look at the challenges of launching a business idea that turned into a global phenomenon. A hit with audiences across many industries and fields, Darryl talks passionately and engagingly on the subjects of:

Having established his own company in 2009 he is able to pass on how he was able to survive the savage repercussions of the GFC and go on to create his own award winning array of acts that are now among the most booked in the Asia Pacific region.
His first hand account of being able to ‘walk the talk’ has established him as one of Australia’s business resilience experts and in 2014 he was invited to speak at the ‘Million Dollar Round Table’ in Toronto, which is arguably the most prestigious conference in the world.

Here’s What Audiences Are Saying About Darryl
“Darryl Lovegrove is a knock out awesome speaker. He is a performer, entrepreneur and what the corporate world needs. An injection of rock and roll values willing to have a go and confront the status quo, he is in my mind a perfect conference opener or closer. I am a big fan of his and reckon Dazza rocks!” – Matt Church Founder, Thought Leaders
“His presentation was nothing short of extraordinary. He’s engaging, funny, insightful, entertaining and of course highly inspirational. So what would I say to someone thinking about hiring Darryl Lovegrove? Just do it.” – Dale Beaumont  MD Business Blueprint. Author of the best selling ‘Secrets Exposed’ series

Why Choose Darryl Lovegrove?
His personal experience – building an idea from concept stage and turning it into a thriving international business – combined with his natural charisma and performing background makes him the ideal choice to motivate and inspire your guests.
Not only does he speak in a dynamic and compelling manner, Lovegrove actually punctuates his story with the live performance of operatic arias making him the perfect opener or closer for a Conference, incentive or event.
If you’re looking for a speaker with an amazing story to tell, key ‘take home’ messages, who will motivate and inspire your audience to deliver the best of themselves and strive for success, Darryl is simply the best.
“Darryl amazes me, always has. His story is uplifting but what’s even better is the lessons and inspiration you take from it. Here is a guy who has walked the talk – actually that’s not right – he sprinted it!” – Nigel Collin,  Director, Thinkativity