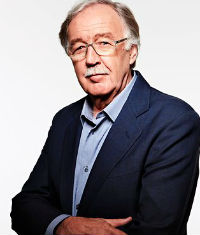 After studying Arts and later journalism at Queensland University and pursuing a career into his late 20s as a high school teacher, George entered journalism commencing with several years of reporting for The Australian and Financial Review newspapers. In between, there was a brief spell behind the political scenes in Canberra with then Attorney General Lionel Murphy leading to his first TV political interviews on the irreverent and highly regarded flagship ABC TV’s This Day Tonight.

George’s list of interviewees and profiles over the years, both nationally and internationally spans politics, the arts and sport. For those who like more detail (!!) it includes such musical genius as Bob Marley, Enya and Dylan; Hollywood legends Steven Spielberg and Robert Redford; an exclusive with Australia’s INXS band after Michael Hutchens death and his infamous Margaret Thatcher interview as well as incisive tracking of the Israeli conflict via several of its leaders and peace-brokers.

George has interviewed the entire last generation of Australian Prime Ministers and a myriad of national icons including Cathy Freeman and Paul Hogan.

His “wonderful, warm, common touch” aids George’s profiles of their non-famous equivalents in his efforts to reveal the Australian persona.

Like any versatile journalist George has also covered a huge gambit of community issues — addressing the treatment of the intellectually disabled, the scandal of uranium dump sites in outback Aboriginal settlements and the economic fortunes of “Down Under” – working alongside some of the great cameramen and producers of the past twenty years.

In 2004, George hosted the 6.30pm national time slot on ABC Television.
Recommissioned for 2003/04 and renamed George Negus Tonight, the trends and issues program included an Australia-wide team of reporters and producers. A viewer of GNT who also recently read the book has written from the school of physics at the University of WA. John Budge says: “George, I would like to say how much I enjoy “George Negus Tonight,” long may it continue. Your nice, easy and laidback Aussie style is terrific.” Unfortunately for such viewers, the ABC cancelled GNT after its 2004 season.
AT was George’s 5th TV job which has included his unforgettable contributions as founding presenter of two of Australia’s most watched television current affairs programs, Channel Nine’s Sixty Minutes (1979-86) and ABC Television’s Foreign Correspondent (1992-99) as well as Nine’s Today Show and ABCs This Day Tonight. George also presented Dateline the SBS flagship current affairs program.