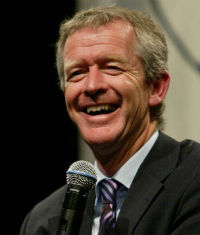 IAN COVER is a founding member of the ABC Radio team, the Coodabeen Champions. In 2015, the Coodabeens are broadcasting the 35th season of their ever-popular Aussie Rules footy program, surely a record for Australian radio.

As well as his role with the Coodabeens, Ian is renowned for his professional and entertaining work as an MC at corporate, charity and sporting events. His radio background assists him to get the best out of guests in interview situations while his experience in the media, sport and entertainment industries has provided Ian with a wealth of stories of his own which he can share with audiences as a guest/keynote speaker.

Ian has forged strong relationships with many businesses and organisations who engage his services on a regular basis. Heading the list is Cricket Victoria where he was in-house MC for two decades, playing a key role in establishing the Lindsay Hassett Club as Melbourne’s premier corporate sports luncheon. Ian also acted as resident compere of the Pivots coterie at the Geelong Football Club for 22 years and hosts many of the Cats’ major functions.

It’s all part of a career which saw Ian start his working life as a cadet journalist with the Geelong Advertiser before moving to the Herald and Weekly Times. He has written for all Melbourne’s daily and weekend papers as well as writing columns for sports magazines.

As an author, Ian has written two books with the Coodabeens and a best seller about the 1993 Ashes series with former Australian Test cricket star Merv Hughes. Apart from his radio work with the Coodabeens, Ian has worked in breakfast radio in tandem with John Blackman on 3UZ and with John “Sam” Newman and Darren James on 3AW.

Ian’s television credits are headed by hosting Footy Focus on Optus-TV and appearing as a regular guest on Good Morning Australia with Bert Newton.

A long-time unofficial ambassador for his hometown Geelong, Ian formalised that role in 1996 when he was elected as the Member for Geelong Province in the Victorian Parliament. He served as the Shadow Minister for Sport and Racing from 2000-2002. Following his defeat in the November 2002 election, Ian returned to media and public speaking work.

He was quickly in demand again as an MC and speaker at lunches, dinners, sports nights, conferences, corporate events and charity functions. His charity work extends to ambassadorial roles with food recovery program SecondBite, the EJ Whitten Foundation and the Women’s Cancer Foundation.

A wonderful choice. Interacted with the audience well, picked up on some of the nuances of the Association and responded delightfully – really personalised the evening. An awards event with 30+ categories can be very dry but he managed to keep the audience interested and involved. Ian made our 25th awards evening a great event.

Excellent. Ian was just fantastic. We could not have wished for a better MC.

Ian was a pleasure to deal with, very friendly and approachable with nothing being too much trouble. He efficiently and professionally anchored our feature event on the day, contributing significantly to its success.

Excellent – as always. Ian has the wonderful ability to read his audience and MC accordingly. He always does a perfect job with great wit and humour.