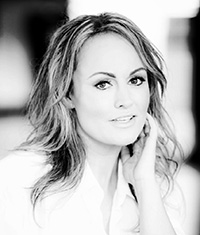 Leah McLeod has been a popular television & radio presenter for the last 18 years.
She is also one of the country’s leading voice over artists and narrator.
Leah’s on camera presence has been the hallmark of her success – she is real, funny and incredibly relatable to her demographic

Her TV roles have been many and varied. She shot to national prominence during her time on Channel V, where she interviewed the biggest names in the local and international entertainment industry.
She has since hosted a number of prime-time shiny floor shows for the major TV networks and become an authority in the lifestyle genre thanks to her hands-on hosting role in shows such as ’The Home Team’, ‘DIY Rescue’ and ‘Live This’

Leah’s infectious personality and ability to engage with her audience has made her a natural on radio.  She has hosted shows on Triple M, ARN and Nova in Sydney as well as SAFM and Triple M in Adelaide.
She has been the voice of numerous high-profile advertising campaigns across the country and recently narrated the acclaimed SBS TV series ‘My Restaurant in India’.

Leah is a clever, quick witted media performer. Her spontaneity and quick thinking comes naturally and she’s not afraid to speak her mind.  Regarded as one of the best live TV performers in the country, she is equally at home in the studio or working out in the field.
Leah has emceed many launches, corporate functions and awards events. She is the consummate master of ceremonies who is always well prepared, can set the scene and maintain energy and focus throughout any event.

Leah is currently hosting the Network Ten series “The Home Team” and a regular contributor on “Studio 10”.

Leah you did an amazing job.. thank you for helping make our event such a great success.

Leah did a brilliant job controlling a large room of people. Her preparation and knowledge of our goals was first class and her communication skills are outstanding.

Professional, knowledgeable, personable and added value to our event way beyond our expectations.

Very professional, a great MC who kept the crowds attention all night.