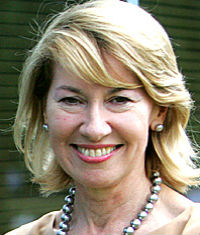 Walkley and Logie Award winning journalist Maxine McKew is one of Australia’s most experienced and authoritative interviewers. In 2003 she was awarded a Centenary Medal for services to broadcasting.

A regular writer for the Bulletin Magazine she also acts as the alternate anchor for the ABC’s flagship current affairs programmes, the national 7-30 Report and Lateline.

Over the past five years, her weekly column in The Bulletin – Lunch with Maxine McKew- produced candid conversations and news breaking stories with Australia’s policy makers. In 2003, the Magazine Publishers Association voted her Columnist of the Year.

A 25-year background in television reporting has seen Maxine cover a wide spectrum including state and national politics, business reporting and a period as foreign correspondent that took her to posts in both Washington DC and to New York. As a result Maxine maintains a strong interest in American political and economic issues and is a regular participant in the privately funded annual Australia/U.S. Leadership Dialogue.

Maxine also has a strong interest in regional events and for the past couple of years has directed dozens of highly focused discussions on the political and economic challenges facing many of Australia’s northern neighbours. In September 2002 she visited Tokyo as one of the Australian delegates in a wide-ranging dialogue sponsored by the Japan Australia Foundation.

In recent years, Maxine’s volunteer activities have included the chairing of the Industry Working Group to Sydney University’s Media Communications course and membership of the Sydney Symphony Council.

Maxine has always been a strong advocate of opportunities for women, both within her own industry and in the wider workforce. She also helps promote the cause of women’s health. Currently she’s Patron of Osteoporosis Australia and throughout the 1990’s was a member of the Advisory Council to the National Breast Cancer Centre.