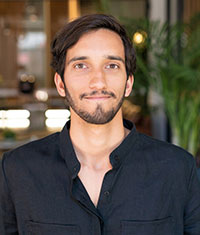 Dedicated to understanding disconnection and restoring connection in our lives, leadership and communities.
Al Jeffery is an internationally renowned community-designer, group-facilitator, author and leadership expert in service to our hyperconnected-yet-deeply-fragmented world.

As Co-Founder and Director at The Base Between (formerly Base Commons), Al explores the themes of disconnection prevalent today, designs and facilitates spaces for re-connection in communities, leadership and the lives of individuals.

With his creative career starting at just 12 years old, Al has been listed in Australia’s Top 30 Entrepreneurs Under 30 twice in a row and nominated for Young Australian of the Year.

Al has always found enjoyment in questioning what was said to be ‘normal’ – much to his parent’s dismay. This meant he began his entrepreneurial career at the age of 12 in pursuit of a ‘new way.’ A new way to produce sustainable clothing, to raise money for charity onlineand to support young social-innovators in developing self-awareness and emotional capacities. Even within himself, as a queer-identifying man, a new way to approach sexuality and relationships in the 21st Century.

By the time he was 18 years old, Al had been listed in Anthill Magazine’s Top 30 Under 30 Entrepreneurs in Australia twice in a row and nominated for Young Australian of the Year. After spending much of his adolescent years head-down in his impact-driven projects, neglecting friendships for sake of time and navigating his then-ostracized sexuality; Al fell into a period of depression and burnout. This – beyond the long journey to re-discovering and landing in his identity – brought to him the question of where to best place his expertise and be in service to our time and context.

What are the psychological, social and environmental causes of the cultural loneliness that exists at this time?

How do we facilitate spaces that support people in re-connecting with themselves, meaning and their creative potential in the 21st Century?

How do we empower leaders to facilitate connected and human-centered workplaces?

How do we design communities and human-systems that nurture our human needs?

Al is the author of his forthcoming book, Modern Tribe, exploring the role of courage and vulnerability in restoring connection in our lives, leadership and communities.

Al brings the wit and fervor of a performance artist, the wisdom and insight of a Buddhist monk and the pragmatism and acumen of a startup- CEO to spaces that are riddled with dis-connection.