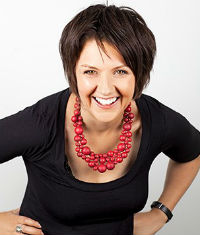 Amanda Blair is a broadcaster, columnist, and public speaker. Currently she is a Board member of The Independent Gambling Authority, was previously on the Social Inclusion Board and spent six years on the Board of the Adelaide Festival. She was a founding Board Member of the Contemporary Collectors Society raising funds for the acquisition of of contemporary works for the Art Gallery of South Australia. She devised and produced Comedy For A Cause as part of the Adelaide Fringe Festival in 2004, 2006 and 2008 which raised funds for Catherine House – a shelter for homeless women.

Her individual fundraising efforts have raised over $1 million dollars. She started a recreational program in the Adelaide Women’s Prison in 2003 and was instrumental in putting a library into the prison to aid the literacy programs.

Her radio career started in Melbourne in 1996 and she hosted the number 1 breakfast show in Adelaide for 5 years. She hosted the afternoon program on FiveAA for 5 ½ years and during that time was the only female on commercial talkback radio in Australia with their own program.

In 2003 she won a prestigious “MO Award” for the best live show in Australia and a Media Citation from Archbishop Philip Wilson for her work instigating the Shoebox of Love Campaign. In 2011 he awarded her the St Mary of the Cross Mackillop Award for outstanding contribution to the media.

She has 4 children under 8 and a husband whom she quite likes when she sees him. Whilst proud of the above achievements, perhaps her finest moment was winning a Blue Ribbon at the Adelaide Show in 2010 in Category 55, Slices, three, two of each, baked or un-baked