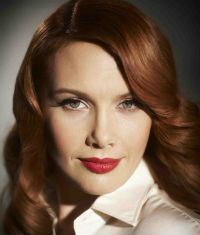 Clare Bowditch is one of Australia’s most successful ARIA Award-winning songwriters, a Logie-nominated actor (Channel 10’s Offspring), a broadcaster on ABC Radio Melbourne and the founder of Big Hearted Business, where she teaches creative people about business, and business people about creativity.

She has had Top Ten albums, been named Rolling Stone Woman of the Year (Contribution to Culture), Yen Young Woman of the Year (Music), toured the world with Gotye and nationally with Leonard Cohen, written for Harpers Bazaar and the Drum, and currently hosts the Afternoon show on ABC Radio Melbourne as well as the Australian Music Show on Qantas.

Along with her creative/business/life-partner Marty Brown, she has three children – identical twins Oscar and Elijah (5), and one-of-a-kind Asha (10).

On TV, she has been a featured guest on programs from “Compass”, “Q&A”, “Artscape” and “Insight”, to “Talkin’ Bout Your Generation”, “Rockwiz” and “Spicks and Specks.” She was a regular guest host on “The Circle” and has presented (and won) at the ARIA Awards. She was the first “Q & A” panellist ever to also perform a song, and interviewed Prime Minister Gillard for MYSPACE, three days before the crucial 2010 election.

Clare Bowditch also co-wrote and starred in the smash-hit Theatre speakers-show “Tales From The Life Of Eva – The Eva Cassidy Story”, in 2011.

Clare’s talents also extend to public speaking, presenting key note speeches, hosting and MC-ing, including the “Women of Letters” book launches and an inspiring TEDx talk at the Wheeler Centre in December 2012.

Clare narrated Music Max’s “My First Gig” Series One and Two, and hosted the nightly Evenings radio show on ABC 774 in a national broadcast during the summer of 2011. She’s also hosted summer shows on Triple J and has guest-edited a special edition of Australian Musician magazine.

Clare Bowditch is regularly invited to sit on both Ministerial and Award Assessment panels (Australia Council, AMP, ARIA, APRA), and was Secretary of the Music Victoria Board until 2012. She is also a proud ambassador for Life’s Little Treasures, PPCA and APRA.

Harnessing right-brain intelligence.
Riding the dragon: how to take risks.
The Hero’s Journey: lessons from Joseph Campbell.
How to make your living doing the things that you love.
Unlocking and maintaining creativity in your life and business.
Practical, fun right-brain/left-brain bridging exercises.
The Educational Journey (Clare’s personal story about the importance of education).
Choosing happiness: research-based presentation.
Honest, powerful solutions for those seeking work / life / family balance.
For appropriate events Clare is happy to sing an acoustic song.
Stepping up: embracing feminine-styles leadership in today’s business landscape.
The Divided Heart: motherhood and creativity, in depth discussion.
Clare can also lead a powerful group-singing workshop around a variety of themes.
Clare’s personal story of finding her life’s path and her muse is funny, heart-warming and inspiring, and she usually finishes by singing a beautiful acoustic song on the theme.
Great facilitator – helps the group connect with each other and connect with their strengths
She has a unique understanding about the way that women can count themselves out
Teaches people how to use their voice more authentically and effectively

Every time Clare Bowditch addresses an audience, a crowd or a person, she never fails to impress with her brilliance, insight, charisma, warmth and freaky ability to be in tune with people.  Be it a music concert or sitting between political heavyweights on ABC’s Q and A, she is perfect on a panel, on her own or interviewing anyone, from Nanas on the street to political leaders.  Her extraordinary insight and natural connection with people stays with anyone lucky enough to be in her presence.

I’ve worked with many radio presenters who have an on-mike persona and an off-mike persona, but Clare has just one warm, friendly persona which is her very own and it’s the reason why everybody who speaks with her falls in love with her.

Most business coaching models rely on a blinkered belief in the success of the ‘business’ as one’s ultimate goal.  Trouble is most of us see life as bigger than ‘business’.   Enter Clare Bowditch with Big Hearted Business; her coaching has been a complete watershed.

In an era where one must wear many hats to survive in the creative world, Clare has an uncanny ability to see to the very core of the situation and bring gentle yet profound wisdom into the equation. I truly feel that she embodies the age old truth that one must lead by example.