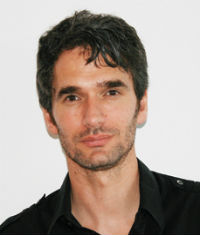 Poised, articulate and humorous, Todd Sampson is an engaging speaker who is highly sought after for his insights surrounding creativity, advertising, marketing, management, leadership and personal achievement.

Todd Sampson is one of the few CEO’s in Australia to come from a strategic background. He has been a Managing Partner and Head of Strategy for over 10 years and during that time has helped lead some of the most successful and creative agencies in the world.

Todd is also one of the most awarded strategists behind some of Australia’s highest profile work. He is the co-creator of the Earth Hour initiative, which has been recognised as one the best ideas in the world. The campaign won the Titanium Lion at Cannes, was awarded the Yahoo Chair for Innovation and B&T’s Creative Campaign of the Year in Australia.

In 2009, Earth Hour was the biggest environmental movement in history with over a 1 billion people participating in over 4000 cities around the world.
Outside of work, Todd enjoys mountain climbing. After roughly two months, eight trips through the ice fall, over a dozen snow storms, two attempts on the summit, snow blindness, near starvation, falling into a crevasse, two avalanches, three deaths and losing 15 kg, he managed to complete his unguided ascent to the top of Mount Everest.

Achieving innovation and creativity in the workplace

How Earth Hour was established and how it has been developed