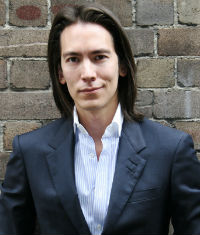 Mike Walsh helps prepare global business leaders for what’s next. He is a leading authority on the intersection of emerging technologies, consumer behaviour and fast growth markets. In his current role as CEO of innovation research lab Tomorrow, he helps some of the world’s leading brands and companies shape the future of their industries.

Constantly traveling the world for the best ideas, he distils the most relevant insights into tailored keynotes that allow any audience to not only understand, but also start to inï¬‚uence the future direction of their industry. Rather than focusing on the distant future, Mike focuses on the next five years – scanning the near horizon for disruptive technologies and consumer innovations on the verge of hitting critical mass, and then translating these into usable business strategies.

Author of the best selling book ‘Futuretainment’ and publisher of the ‘Disruptive Future’ newsletter read by thousands of professionals in the media and entertainment space, Mike’s unique insights and operating experience in emerging markets makes him an expert on the growing influence of consumers in BRIC countries on breakthrough innovation and business transformation. Mike’s new book, “The Divergence” (published 2012), charts the rise of online consumers in these emerging markets, and shows that tomorrow’s Web will be radically different to conventional Western models and will require entirely new engagement strategies. Mike’s views have appeared in a wide range of international publications including Business Week, Forbes and Wallpaper Magazine.

Mike has been a pioneer in the digital space since the 1990s, running both successful start-up ventures as well as holding senior leadership positions in established media organisations. With a background in corporate law and management consulting, Mike began his career at XT3, a spin out from McKinsey and one of the first digital consulting firms created to help major companies embrace the embroynic Web. During the first dotcom boom, MikeÂ launched the technology publishing group internet.com in Australia, which went on to become the leading local technology news and events platform in the country. He also founded and ran Jupiter Research in the Asia Pacific, one of the first research agencies to track the early adoption of e-commerce and digital business models by online consumers. During this period, he was recognised as one of Australia’s “Top 30 Entrepreneurs Under 30” by the Sydney Morning Herald and the Age Newspaper.

After his experiences in the Web space, Mike spent five years in senior strategy roles at News Corporation where he helped shape the digital strategy for both their Australian newspaper and Asian TV divisions. Directly engaged by the CEO of Star TV to provide the company with a digital roadmap for their operations, he began his in-depth research into the fast growth markets of Asia.

While in Hong Kong and inspired by the dramatic changes taking place in China and India, Mike founded his latest venture, Tomorrow – an innovation research lab focused on emerging technology and disruptive consumer behaviour. Always in demand for his fresh insights and practical future focused strategies – Mike has advised the CEOs and senior management teams at multinational companies include the BBC, Fujiï¬lm, Richemont, MSN, Star TV, Televisa, Philips, and HSBC.

Mike is a dynamic and high energy presenter, blending a multimedia feast of video, high impact visuals and mind blowing case studies of innovation from his personal experiences in cutting edge global markets. Whether a conference, strategy offsite or an intimate boardroom discussion – Mike’s presentations act as a powerful catalyst for innovation, strategic planning and brand inspiration.

“Rather than a technologist, I see myself as an anthropologist looking at the disruptive impact of innovation on consumer behaviour.”- Mike Walsh