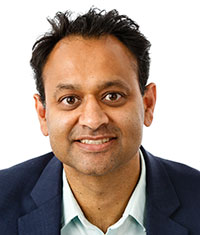 Dr Tanveer Ahmed is a psychiatry registrar and writer. He is a former television journalist who currently writes a regular opinion column for the Sydney Morning Herald related to political and social affairs. He is also a visting fellow for the Centre for Independent Studies.

He is regularly asked to speak around the country on topics such as leadership, international affairs and the future of geopolitics and social topics pertaining to mental health and multiculturalism.

He often appears on radio and television to give his opinions and commentary. He has appeared on ABC’s Q and A program, SBS’s Insight, the Sunday program and has been a regular expert on Sunrise.
He is an appointee to the Advertising Standards Board and is a previous national representative for junior doctors with the Australian Medical Association. He was chosen by a PM’s committee in 2006 as one of a hundred future leaders of Australia.

He also has a lighter side and has previously performed comedy, making the finals of Australia’s biggest amateur comedy competition- RAW. He once played the co-cost in the gameshow, National Bingo Night. He has also appeared on the Brain’s Trust of the gameshow, The Einstein Factor.

Tanveer was born in Bangladesh and arrived in Australia aged five. He was raised in western Sydney and was educated in Sydney Grammar School and Sydney University, where he studied arts and medicine. He is married to a senior public servant and has a 2 year old daughter.

His multidisciplinary experience make him an extraordinary keynote performer.
His unique combination of abilities also make him an exceptional motivational or after dinner speaker as well as a gifted master of ceremonies.

Leadership-
Dr Ahmed has led in a range of arenas, from being the national representative for junior doctors and taking on the Federal government to being a prominent voice among ethnic minorities. He was chosen by a PM’s committee as one of a hundred future leaders of Australia. Add to this his knowledge base in the psychological sciences, he is able to give some unique insights into the nature of leadership in the modern environment.

South Asia-
Dr Ahmed is a geopolitical expert for the South Asian region- including India and Pakistan. He has studied and engaged with the region for many years and it is his area of expertise for the country’s most influential think tank- the Centre of Independent Studies. He is able to give insights into the challenges and opportunities of doing business in India to the nature of terrorism and conflict within Pakistan. He is a regular commentator in issues related to the region and how they relate to Australia for this column in the Sydney Morning Herald.

Mental Health and the Workplace-
Dr Ahmed is a practising psychiatrist. He is an expert in mental health problems and how they impact on the workplace and wider society. He has written for the My Career section of the Sydney Morning Herald on issues such as ‘The Troubled Worker’, post-traumatic stress and organizations as well the problems with the nascissistic leader. He has been the mental expert on the Channel 7 Sunrise program and writes for Men’s Health magazine.