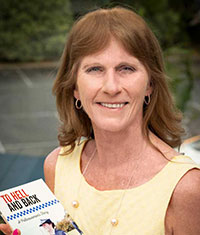 After serving for nearly 30 years with Victoria Police, Carolyn Pethick is travelling the state talking to groups and businesses about her experiences of discrimination, bullying and sexual harassment within the ranks of Victoria Police.

Both her talks and her book “To Hell and Back – A Policewoman’s Story’, are aimed at encouraging women to speak up and report the discriminative treatment that women experience in the workplace daily. She is also educating the offenders on the long term effects that these behaviours can have on their victims. Carolyn has made it her mission to be the voice of the victims, both male and female, who are too scared or intimidated to speak out for themselves.

“I could have stayed in the Police Force and continued my career but when the Human Rights and Equal Opportunities Commission Review into discrimination within Victoria Police was released I knew I had to resign and become a champion of change and publish my book. We all have a responsibility to encourage change.”

She is also advocating for the promised compensation to be paid to the hundreds of police members who went through similar experiences that she endured. In December 2015 the Chief Commissioner Graham Ashton and the Premier Daniel Andrews publically apologised to these members and promised that no matter what the cost, these members would be compensated. Nearly two years later and this promise has still not been addressed. Despite constant calls to both Victoria Police and Politicians the “Redress Scheme” is still not in operation. Carolyn will not give up pushing for this promise to come to fruition as she believes it will make other workplaces think twice about allowing this type of behaviour being “acceptable”. “If it starts to actually cost them money then maybe they will rethink about taking appropriate action when a report is made.”

Stand Up For What you Believe in – No Matter how hard – Don’t give up
Carolyn still believes that when you believe something is wrong – speak out and stand up no matter what the immediate result. It is the only way to bring change