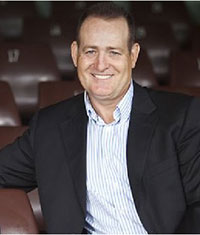 David Campese is a household name in rugby. Many view David as one of the greatest and most entertaining rugby players to have ever graced the rugby field. Representing Australia for 15 years and new south wales for 11 years, he achieved and still holds the world record for the most tries in a test match (64).

To add to his credentials, he was first man in Australian history to play 101 tests for his country and is one out of only 5 players in the worldwide that has achieved over 100 games for their country.

Despite being retired for almost 10 years, David’s resounding impact on the game is still evident in his controversial yet consistently accurate opinion on the game which continues to entertain and resonate throughout the international rugby world.

David is focusing on his Rugby Academy in Hong Kong which launched in 2011 and is in its 2nd year. He will also be branching out to other Asian countries, so stay tuned.

He lived in Durban, South Africa and was involved in rugby commentary with Supersport SA, providing specialist skills coaching for The Murray Mexted Investec Academy in South Africa as well as private coaching and junior rugby clinics.

David was recently working with the Tonga 7’s team after signing a year contract as a consultant leading up to the 2010 Commonwealth Games in India.

David still travels the world as a key note speaker for corporate and hospitality events.