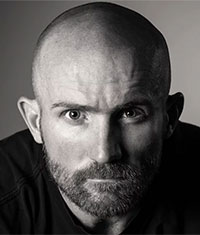 Luke Richmond grew up in the Northern Territory of Australia on various cattle stations and was educated via the school of distance education broadcast (homeschooling) from Mount Isa. Luke completed his High school in far North Queensland in a tiny Italian town called Ingham.

Joining the Army at 17 gave Luke the discipline and world knowledge he was needing and serving his country overseas lit a fire of adventure in Luke that he has pursued until this day.

Luke hit rock bottom in his early twenties succumbing to drug addiction but managed to set himself straight after finding a sweaty salvation in the Muay Thai training camps of Thailand.

Since those demon days Luke has gone on to climb the highest mountain on 6 continents, brave -60 degree temperatures in Antarctica and been held captive in the jungles of West Papua.

Luke has witnessed death before his eyes on the highest peaks and he healed his mind with an ocean row across the Atlantic setting a new world record.

In Luke’s most recent expedition he dragged a cart containing all of his food and water across 1800 km of the Gobi Desert in Mongolia becoming the first Australian male to do so.

Luke has found comfort in suffering while on adventures and he feels as if he has lived ten lifetimes yet he is only just getting started.

One Life One Chance – This theme is broken into four key lessons from Luke’s last ten years of expeditions.

1, Being grateful for suffering.

Each lesson is delivered with unique stories of how they were originally learned.

Luke is by far the best speaker I have engaged in the 6 years that I have been arranging events for our company. We engaged Luke as our keynote speaker for our apprentice awards evening and he was the perfect choice. Luke is a mesmerising speaker and is able to take the listeners on a journey. Luke talks frankly about his early struggles and the transformation he had to undergo to become the adventurer he is today. Luke’s message of goal setting and having a 5 year plan really resonated with our staff and I would recommend Luke for any potential speaking engagement.

Stamford has had a proud association with Luke Richmond and OLOC over many years. We have shared in numerous adventures with Luke as a sponsor, enjoying and learning from both the success and failure alike.
We have also had Luke speak at numerous events we have hosted as a business and would have no hesitation to recommend. Luke brings great natural energy to a room and a refreshing change from corporate talk or the less than motivational speaker.
We look forward to continuing our association.

Each year I have a team offsite with an agenda that aligns with our yearly theme. Many guest and motivational speakers have been invited, yet none resonated more to both the team and myself than Luke has. His ability to engage with all the different personalities in the team, bringing them along on the journey of his life’s experience, is just one reason the team’s feedback to me was Luke is the best guest we’ve had. The focus areas of our business that we are measuring, have improved, with us continuing to apply lessons from Luke’s story into multiple areas of our workplace. More importantly, members of the team, including myself, have applied some of his philosophies in our personal lives. Luke’s story is nothing short of inspiring and I can’t thank him enough for the positive impact he’s had on us. I look forward to when we can have him join us again and would happily recommend him to others. Regards Fabian Calle General Manager SAP Concur