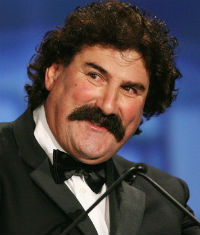 Affectionately known as ‘Dipper’, and one of football’s great characters who played the wings with unrivalled ferocity. Despite taking a few years to establish himself, ‘Dipper’ went on to become one of Hawthorn’s finest. Tall for a winger, Robert DiPierdomenico was renowned for his courageous style and quickly became popular with the fans.

He went on to play 240 games and kick 130 goals with the Hawks, retiring in 1991, including 5 day and 5 night premierships with one of the most successful eras of domination a club has ever seen.

He was known for his toughness and the mustachioed Dipper was one of the much-loved characters in the VFL. DiPierdomenico won a Brownlow Medal in 1986, tying with Greg Williams.

In the 1989 Grand Final against Geelong Football Club, a collision with Gary Ablett broke several of Dipper’s ribs and punctured his lung. Dipper played unaware before finally collapsing at the end of the game. He was sent to hospital where his injury was diagnosed.

Dipper has long been known for big persona, including his always smiling and jovial personality.
After he retired, he became a popular media personality, as a boundary rider with the Seven Network. After Seven lost the rights to broadcast AFL in 2001, Dipper continued his tradition as a boundary-rider on radio station 3AW.

An extremely entertaining and motivational speaker, Dipper is also highly sought after as a Master of Ceremonies.