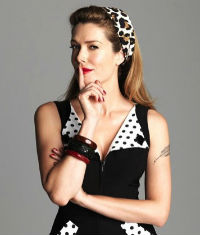 Since 1999 Tara has written 9 bestselling novels, published in 18 countries and 12 languages. Her writing has appeared in Australian Literary Review, The Sydney Morning Herald News Review, The Age, The Daily Telegraph, The Australian, ABC online and more. She is a PhD Candidate at the University of Sydney, and has earned her private investigator credentials (Cert III) from the Australian Security Academy.

Moss is an outspoken advocate for the rights of women and children. She is an ambassador for the Royal Institute for Deaf and Blind Children, a UNICEF Goodwill Ambassador and UNICEF Patron for Breastfeeding for the Baby Friendly Heath Initiative (BFHI). Since 2013 Tara has taken on a larger role as UNICEF’s National Ambassador for Child Survival.

In 2014 Tara was recognised for Outstanding Advocacy for her blog Manus Island: An insider’s report, which helped to break information to the public about the events surrounding the alleged murder of Reza Barati inside the Australian-run Manus Island Immigration Detention Centre.

Tara released her first non-fiction book The Fictional Woman which weaves her own experiences into a broader look at everyday sexism and issues surrounding the underrepresentation of women, modern motherhood, body image and the portrayal of women in politics, entertainment, advertising and the media.

The Archetypal Woman – from Snow White to Wonder Woman. How they influence women today.
The True Cost of Gender bias. How it affects our thinking, experiences and life.