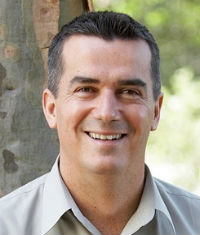 Paul Gilding is a former Executive Director of Greenpeace International. His 20-year involvement with social change organisations has given him a comprehensive insight into the processes of transformation, enabling him to assist business in forecasting and taking advantage of emerging trends. He has a thorough understanding of the challenges sustainability poses for companies, as well as the commercial opportunities it presents.

In 1997, Paul received the prestigious Tomorrow Magazine Environmental Leadership Award. In December 1994, he was listed by Time International in its “Time’s Global 100 Young Leaders for the New Millennium” and in 1993 the Australian Prime Minister presented Paul with an Australia Day Award for Outstanding Achievement for services to the environment. In 1992, the influential World Economic Forum appointed him a Global Leader for Tomorrow at its annual meeting in Davos, Switzerland.

Paul Gilding has spent 35 years trying to change the world, doing everything he can think off. He’s served in the Australian military, chased nuclear armed aircraft carriers in small inflatable boats, plugged up industrial waste discharge pipes, been global CEO of Greenpeace, taught at Cambridge University, owned and run two ground-breaking sustainability focused companies and been a close confidant and advisor to the CEOs of some the world’s largest companies.

Despite the clear lack of progress, the unstoppable and flexible optimist is now an author and advocate, writing his widely acclaimed book “The Great Disruption”, which prompted Tom Freidman to write in the NYT: “Ignore Gilding at your peril”. He now travels the world alerting people – in business, community groups, government and even the military –  to the global economic and ecological crisis now unfolding around us, as the world economy reaches and passes the limits to growth.

He is confident we can get through what’s coming and in fact thinks we will rise to the occasion, with change on a scale and at a speed incomprehensible today. He tells us to get prepared for The Great Disruption and “the end of shopping”, as we reinvent the global economy and our model of social progress.
He lives on a farm in southern Tasmania with his wife, where they grow blueberries and raise chickens, sheep and their children.